So, Old RPM Daddy had a really creative take on some Elspeth fan art, a mix of graphics and prose that imagines how a modern-day Skyrim looks back on it’s legendary Dragonborn. Note, the last image on the bottom right is Cari, his original character.

Cari was more excited than usual to go to school that morning.  The new term was actually starting off with an interesting field trip–when was the last time that ever happened?  Granted, she’d been to the Blue Palace Museum and Interpretive Center many times, but she was thrilled just the same.  Exhibits changed frequently, and this year’s theme, “Solitude in the Dragonborn Era,” included a hall dedicated to Elspeth Sigeweald in Solitude!  Elspeth had been Cari’s heroine ever since she was a little girl.  She still treasured her Elspeth storybook she’d received years before, and never missed a chance to learn more about her, fact or legend.

On the tram-ride to the museum, the teacher, Fru Bergqvist, distributed the museum passes, which were large, maybe twice the length of Cari’s hand.  Each featured a colorful illustration based on the museum exhibits; Cari quickly traded hers to her friend Leyda for a pass featuring Elspeth.  “That’s going in my scrapbook,” she said, and it did.  Arriving near the Västerport, the class debarked and walked the rest of the way to the museum.

Once inside, Cari scanned her museum pass at the turnstile and made a beeline to the Elspeth displays, followed closely by Leyda.  Cari was breathtaken.  Everything seemed to catch her eye at once; she had to force herself to take the exhibits in one at a time, in order.  Over here:  A large display outlining Elspeth’s heritage, and the major events of her life: her birth at Frostcraig Spire, her departure to Bruma, and her travels through Skyrim as Dragonborn with her trusted companions, Lydia of Whiterun and Trygve Wartooth of Riften.  Over there:  A mock-up of what the inside of her house would have looked like, complete with the sorts of clothing she might have worn and the tools she would have used.  Finally, past a display of Dragonborn-era weapons, was a life size wax representation of Elspeth herself, dressed in a hooded robe, carrying Oberon, the sword of her ancestors, grim, determined, beautiful!  Cari had to stop herself from jumping with excitement, reminding herself that at nearly thirteen years old, she shouldn’t be dancing around like a little kid!

Leyda’s voice snapped Cari out of her reverie.  “Cari, Fru Bergqvist sent me to fetch you.  It’s time to go!”

“What?  Didn’t we just get here?”  Cari had no idea how much time had passed.

“We’ve got just enough time to hit the gift shop on the way out.  Hurry up!”  Cari really did want a souvenir, and she was delighted to find a colorful Elspeth brooch, sort of like the Miki brooch her favorite Aunt Teri brought back from Riften a few months before.  She also grabbed a postcard showing Elspeth launching a sheet of flame from her fingers.  That would go to her friend Max down in Rorikstead.  Cari and her friend paid quickly and found their way to the cafeteria in time to join the rest of the class for lunch.

The rest of the school day passed in a blur–Cari couldn’t wait to call Aunt Teri and tell her about her visit.  She was imagining how to address Max’s postcard:  “Here’s a picture of violence, so naturally I thought of you!” she’d write.  Cari didn’t think her classmates regarded field trips like these as anything more than a diversion.  She didn’t blame them for feeling that way, but for her, a visit to the museum was an immersion, something she could lose herself in.  Cari resolved that day that if she won a place at University, she would study history.  That, however, is a story yet to be told! 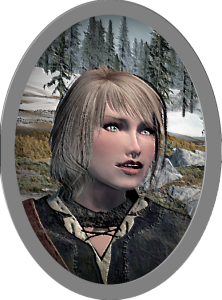 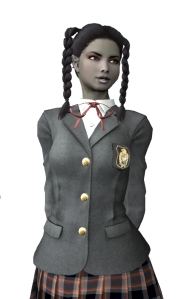